Aside: Two Ways of Being in the Middle

Posted in Levels of Reality, and Technical Philosophy

However, there are two ways of being in the middle, corresponding to the two sorts of generalism.

Two Ways of Determining Your Position

In one sort of generalism, you decide whether one thing is at a higher or lower level than another by asking about parts and wholes. Is your DNA a part of you? Then it belongs to a lower level of reality than you. Are you a part of a system? Then it belongs to a higher level of reality than you. I call that sort of generalism “unificationism.”

The Middle in a Unificationist Hierarchy 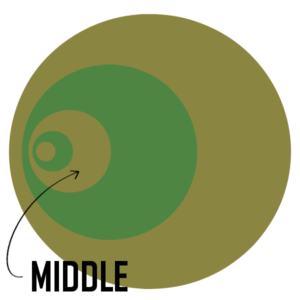 At the top, you have the cosmos. At the bottom, you have subatomic particles. In the middle, you have organisms.

The Middle in an Originalist Hierarchy

If instead you think about the levels of reality in terms of originals and images, you think of reality as a series of ever-more-derivative copies. God, or the eternal forms, or the laws of mathematics, etc. is the ultimate reality; physical things are images or creations of God/the forms/mathematics; and things we create are images of us (just as are pictures, shadows, and reflections of physical things). 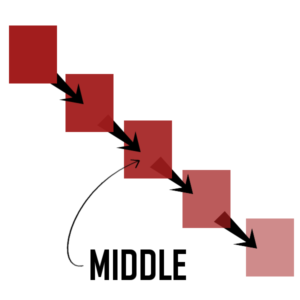 At the top, you have God/the forms/mathematics. At the bottom, you have illusions, reflections, and shadows. In the middle, you have physical objects.

What I Mean by Middle Reality

I borrow my notion of middle reality from unificationism. The “middle” is the level of organisms. And an organism can be anything from the size of a blue whale to the size of a bacterium.1 (Note: a cell might be the same size as a bacterium and yet belong to a lower level of reality because it is a part of an organism, while the bacterium is an organism in its own right.)

When I argue, therefore, that reality is realest in the middle, I mean that wholes like organisms are the largest wholes there are. Organisms are not parts of larger wholes. They may be members of larger groups or participants in larger systems, but neither groups nor systems are themselves wholes. Groups and systems, to borrow Aristotle’s term, are mere “heaps.” They are reducible to (are nothing more than) their members or participants, behaving and interacting in particular ways.

Anyway, next time we’ll be back to arguing in favor of middle reality.