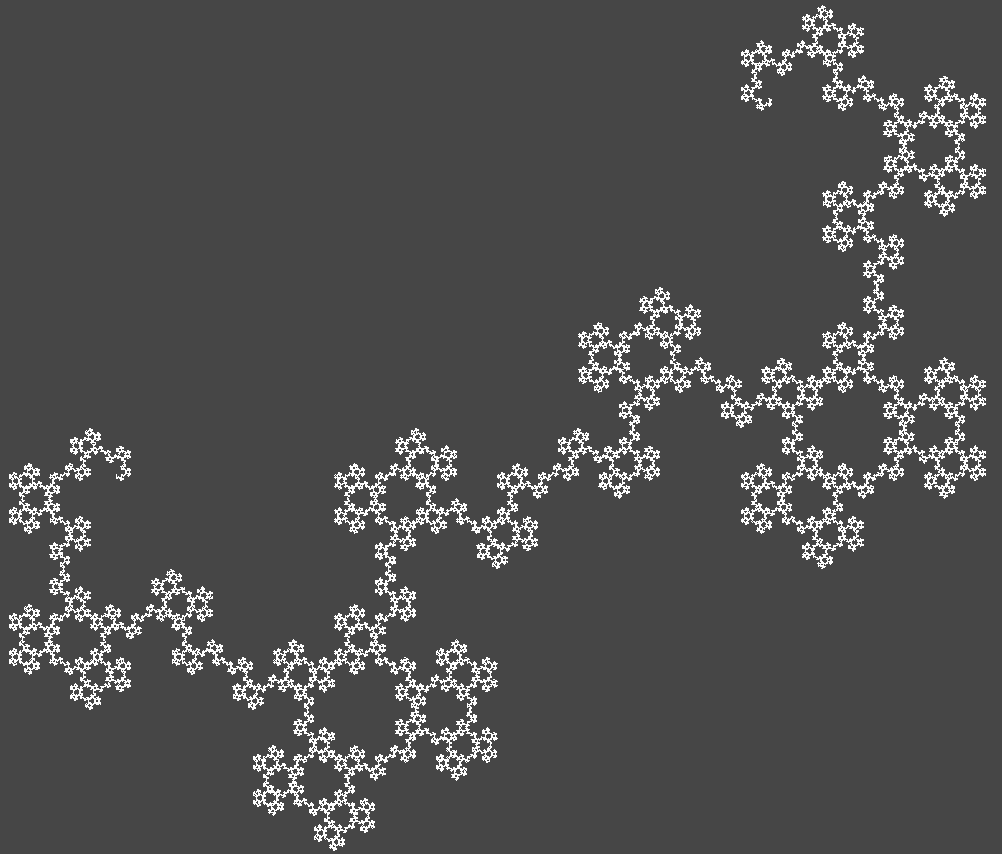 My students and I have been talking about fractals recently, and specifically exploring how Lindenmayer Systems (L-systems) can be used to generate them.

An L-system then provides some replacement rules for generating new strings of symbols. For example, the Dragon Curve’s L-system works by replacing every “X” with “X+YF+,” and every “Y” with “-FX-Y”

You can think of this process as one of growth. The initial string of symbols is a seed, which grows — through multiple cycles of replacement — longer and longer. In the case of the Dragon Curve, “FX” grows into “FX+YF+” (because the “X” in “FX” grows into “X+YF+”).

In addition to the initial seed and the set of replacement rules, an L-system then provides a set of interpretation rules. That is, it tells you how read the strings of symbols you create as a list of instructions.

In the Dragon Curve’s L-System, the interpretation rules are:

The idea is that you imagine that the string of symbols produced by the L-system is actually a set of instructions for a turtle, telling it how to crawl around, when to turn, and when to draw lines or dots (or whatever).

If you let the Dragon Curve’s L-system string grow long enough, and then give the resulting set of instructions to an artistic turtle, you end up with this:

I believe this is called the “Dragon Curve” because it looks like a Chinese dragon, seen from above. There are too many legs, but I suspect we Westerners might think of Chinese dragons as “many-legged” because of the many legs of the performers in Chinese New Year dragon dance.

For reasons that are not entirely clear to me, there is a different fractal that is also called a “dragon”: the or Lévy Dragon/Lévy C Curve:

The image above comes not from the C Curve’s L-system, but from my work on the fractal structure of the number line. Evidently, however, the C Curve also has an L-system representation that is rather simple.

If you zoom in, this is what the curve looks like:

For the Dragon Curve, in contrast, the two replacement strings are kind of “inverse symmetrical” to each other. While “X+YF+” is like the mirror image of “-FX-Y,” it flips not only the order of the symbols, but the symbols themselves. That is, for each symbol that has an “opposite” (“+” and “-,” and “X” and “Y”), it replaces that symbol with its opposite.

Unlike both, however, the Flower Dragon uses 60 degree turns. The Dragon Curve uses 90 degrees turns, while the C Curve uses 45 degree turns (which add up to 90 degree angles).

I haven’t calculated the fractal dimension of the Flower Dragon — or bothered to find out if it already has been given another name by someone else.

But I look forward working with my students to figure out what properties an L-system needs to have in order to produce fractals. Some replacement rule choices and interpretation rule choices “work,” and others don’t.